At first glance, you could mistake them for “the real thing:” bronze idols of Hindu female deities. And in many respects, not just resemblance, that is exactly what they are. Siri Devi Khandavilli models her sculptural images using traditional formulae to portray the female goddesses of the vast Hindu pantheon, a vocabulary that has endured through millennia. The poodle identity places the work outside the tradition, creating tension that forms the work’s edge. Further, she produces them in a traditional foundry where relationships, method, and tools have changed little since the Bronze Age.

The artist’s intentions are materialized by her canny use of traditional forms modified to her own ends--- to comment on the world of now, a present that with increasing intensityis happening both in the U.S. and India. And they are reflections on her own nature. Khandavilli pays homage to the tradition--- both the craftsmanship and the images, both of which are intertwined with deep-rooted cultural significance and religious meaning, working both within and beyond tradition, and in the process, conjoining several polarities: traditional Indian village ways with the global contemporary world, the religious with the secular, and her own hybrid identity of Indian and American, traditional and modern. The work is beautiful and witty, luring the viewer to look closely and enjoy. We are captivated by the work, so when we do look closely, we realize that with Khandavilli’s portrayal of female sensuality and her incredible skill, we are seduced, and participate in her critique.

In these bronze works, Khandavilli examines an aspect of female experience, that of being the object of lust or the male gaze. The degree of sexual explicitness in the figures is, in the West, rarely seen in portrayals of divinities where female sexuality is still frequently used to sell products or is itself commodified, the province of prostitutes or entertainers. But Siri also delves into aspects of her own identity. Devi is her middle name. And she has even said that she is the poodle. She is a serious person, disciplined, a good mother and wife. But she also acknowledges her own playfulness and susceptibility to vanity, her love of things. It is a powerful admission, that she is aware of her internal conflicts and contradictions. They may arise, in part, from her being both at home and estranged in both American and Indian contexts. She is the goddess, the icon embodying her, in the early performance works. Without deliberately creating selfportraits, Khandavilli sees herself in her bronze figures and sees them as avatars of herself. They mirror her and vice versa in a two-way exchange.

In contemporary India, the ancient Hindu iconography has been recruited for political, nationalistic purposes. Durga, a fierce avatar of the Devi, is claimed as a defender of a retrograde return to purity that has a racist and classist agenda. In popular practice of the religion, the icons are exaggerated--- saccharine sweet or grotesquely bloodthirsty. These are ubiquitous in Indian markets. The lurid kitsch prints of the gods are the distant cousins of iridescent-colored images of Jesus or the Corazon Sagrado in the West.

The Hindu pantheon has also been freely interpreted, largely for a Western audience, as a New Age alternative to other religions that seem to have grown stale. Khandavilli does not exploit the imagery or religious meaning in so distorting a way. She simply brings it into contemporary and global relevance. But they carry a feminist subtext: beauty is a decorative and often deceptive scabbard for an aspect of femaleness that can be dangerous. In feminist terms, Khandavilli achieves a complex image of beauty that is powerful and, through that powerfulness, subversive.

These figures are completely at home--- in charge, in fact--- in our time and place. 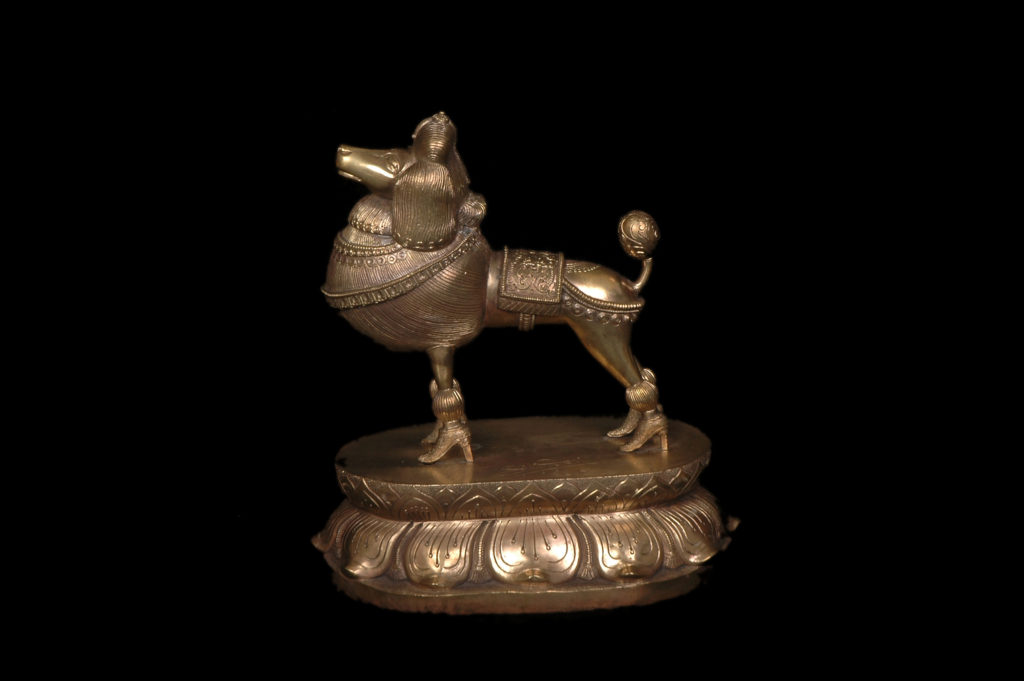 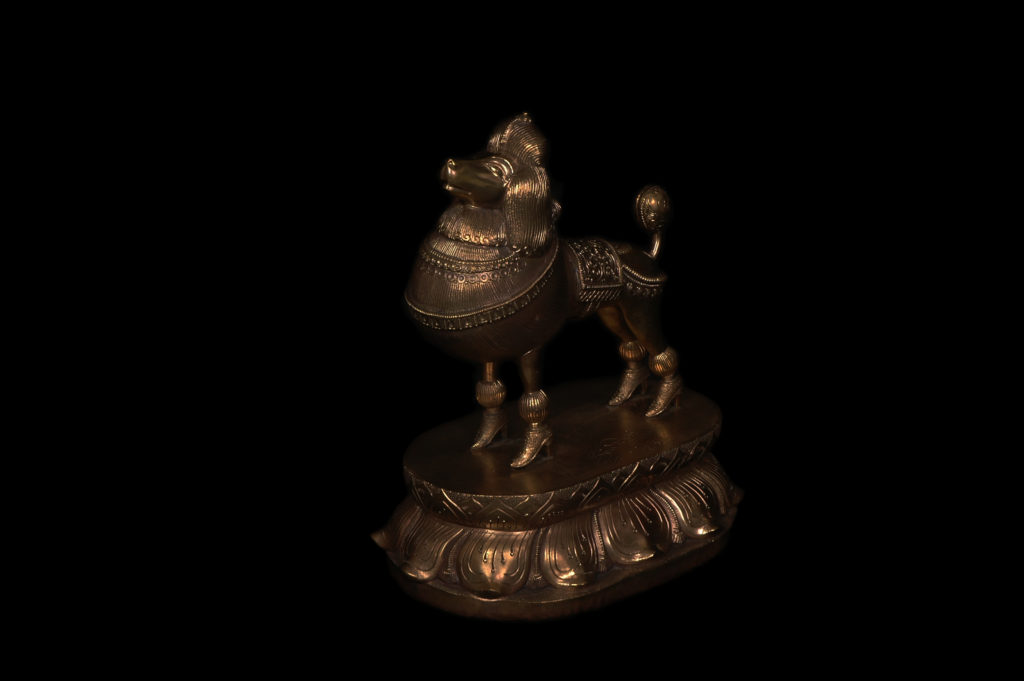 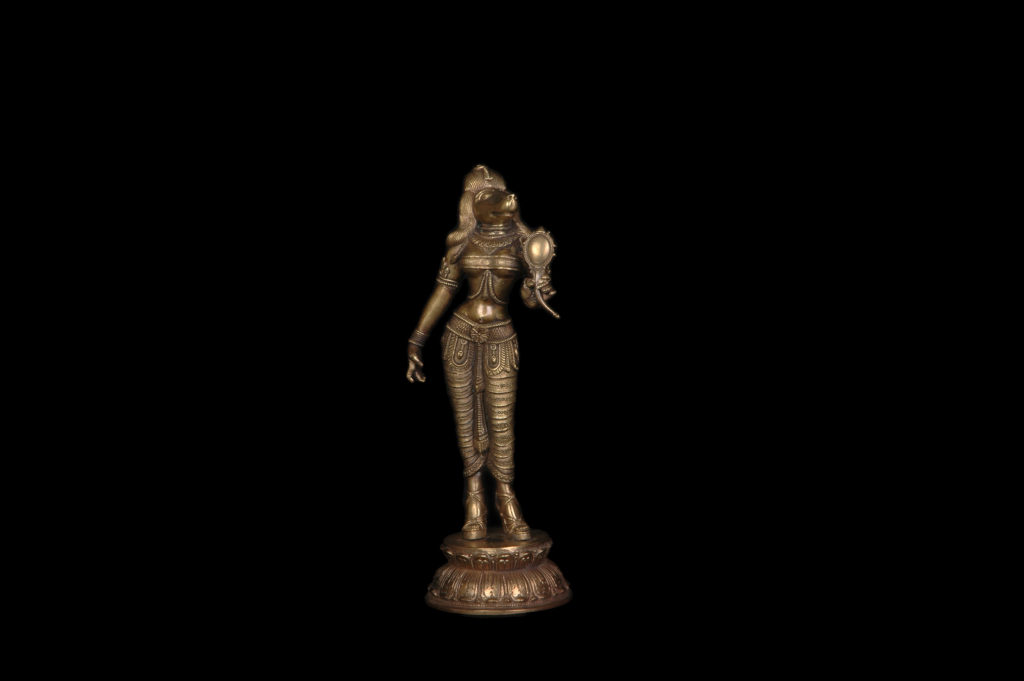 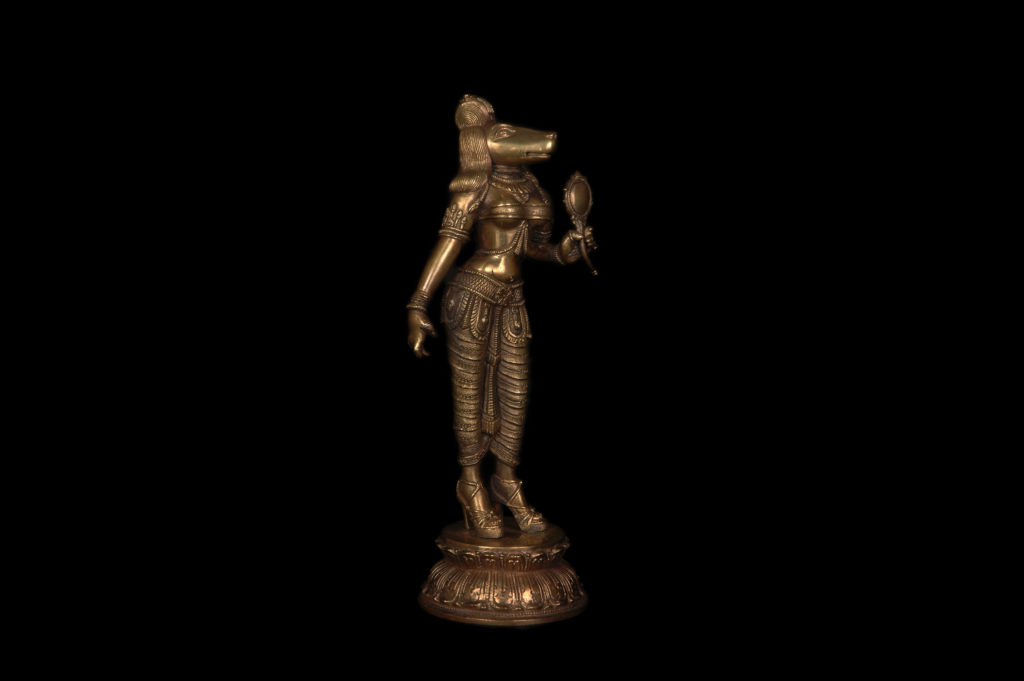 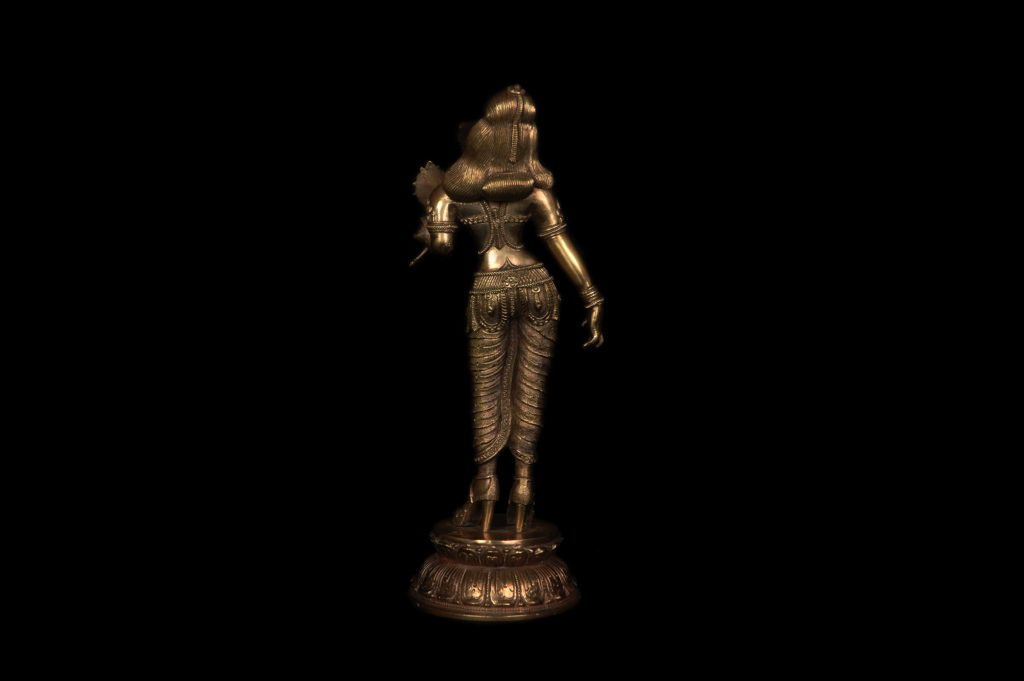 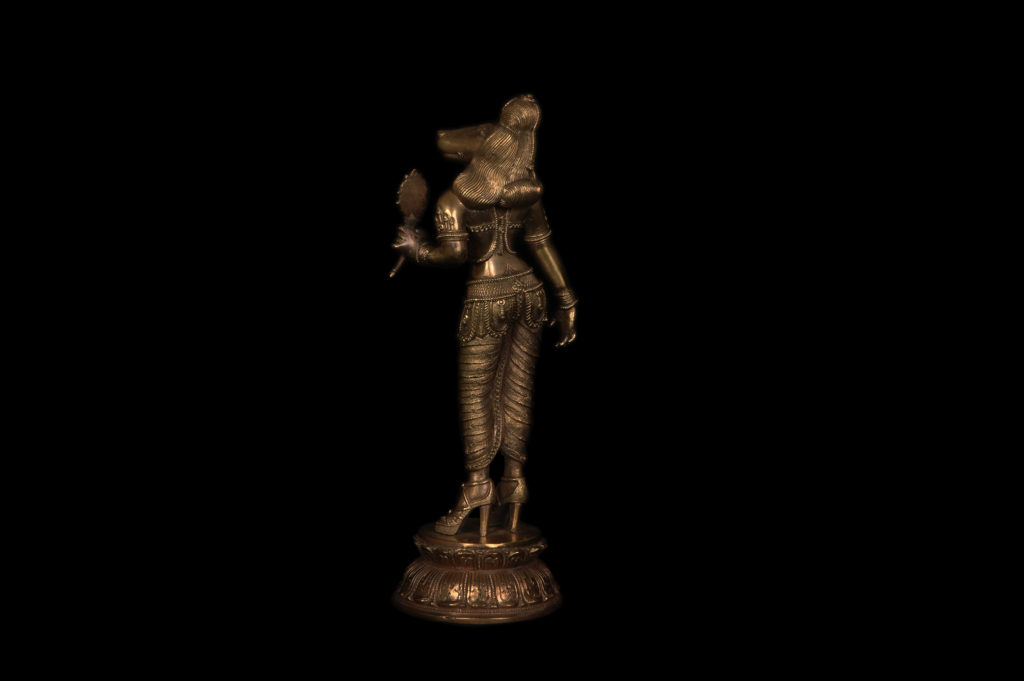 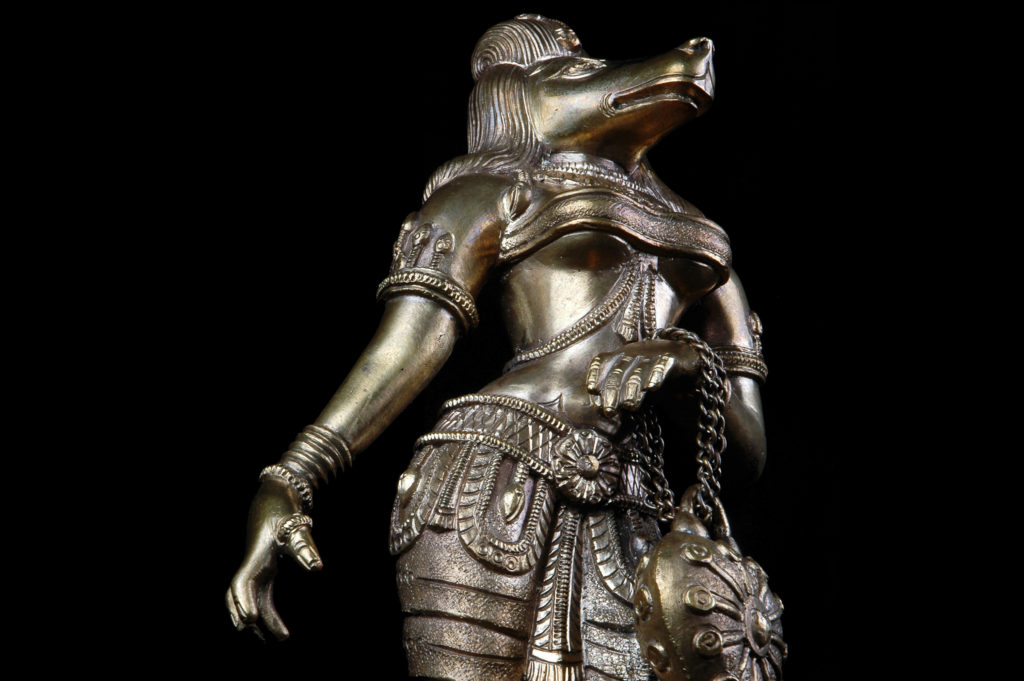 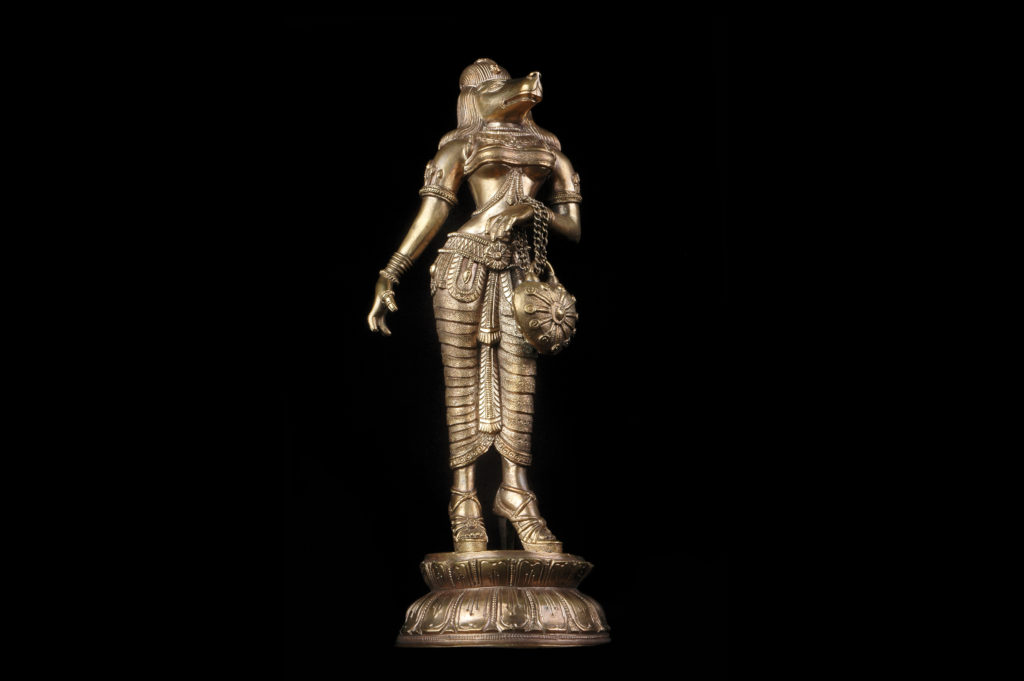 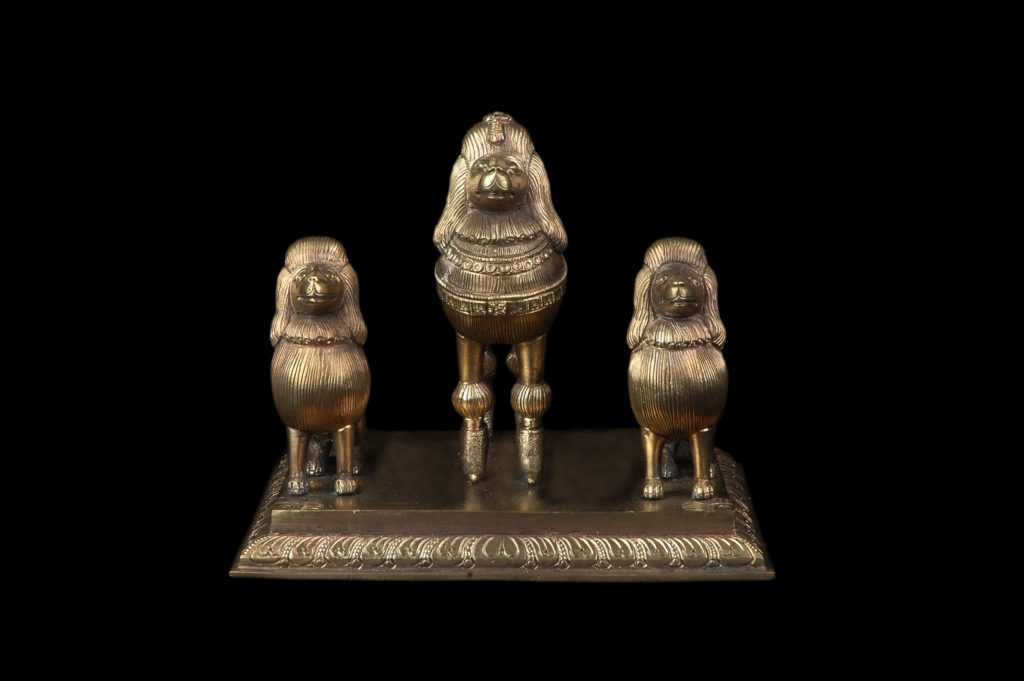 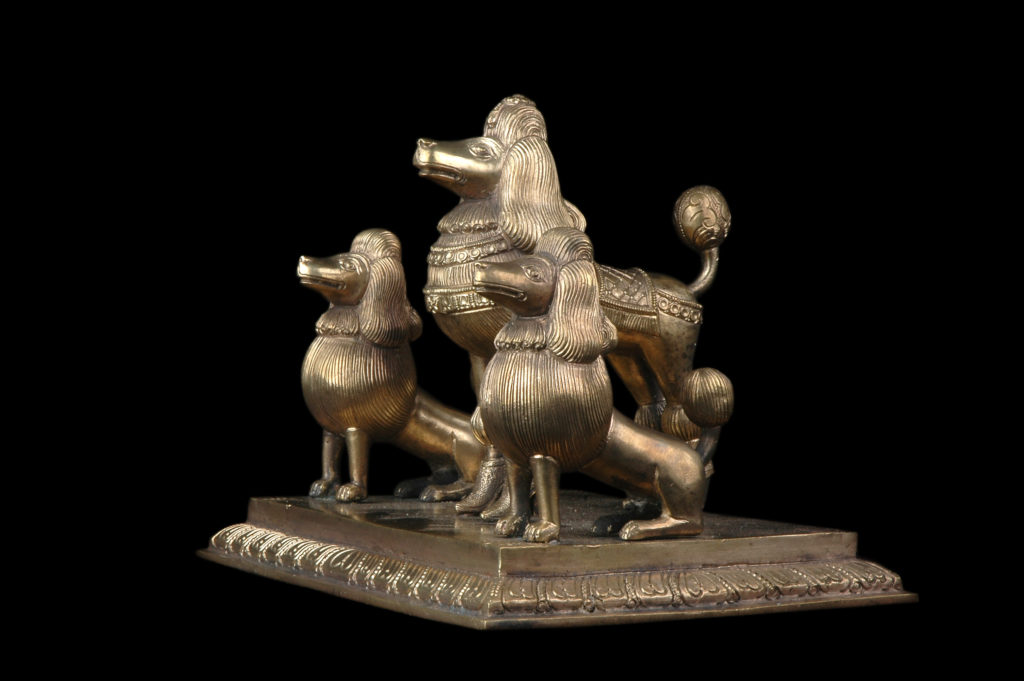 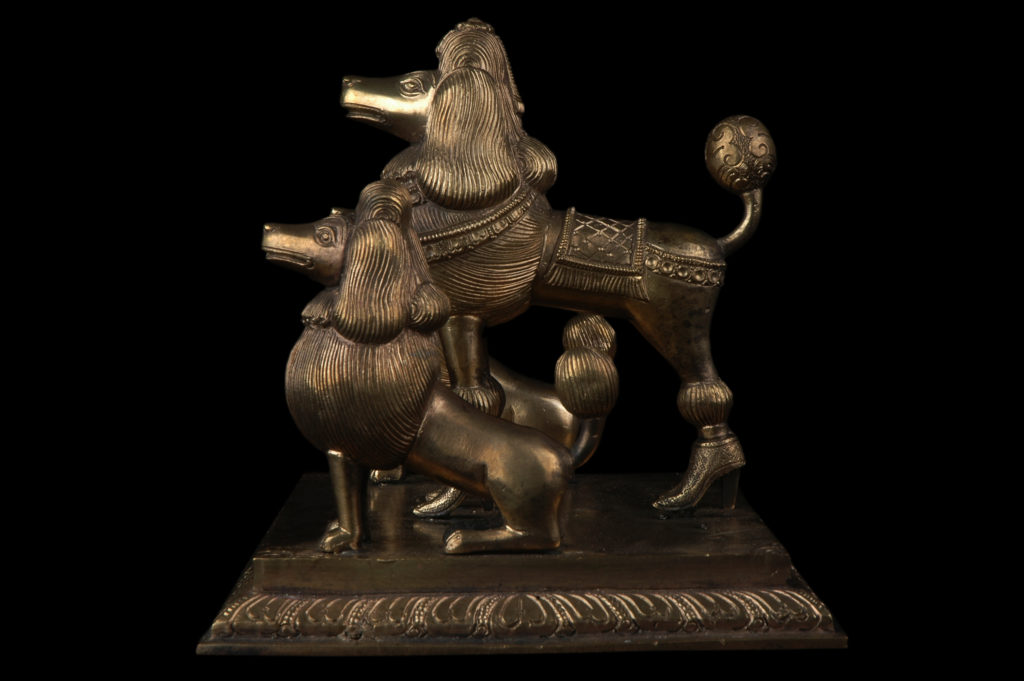 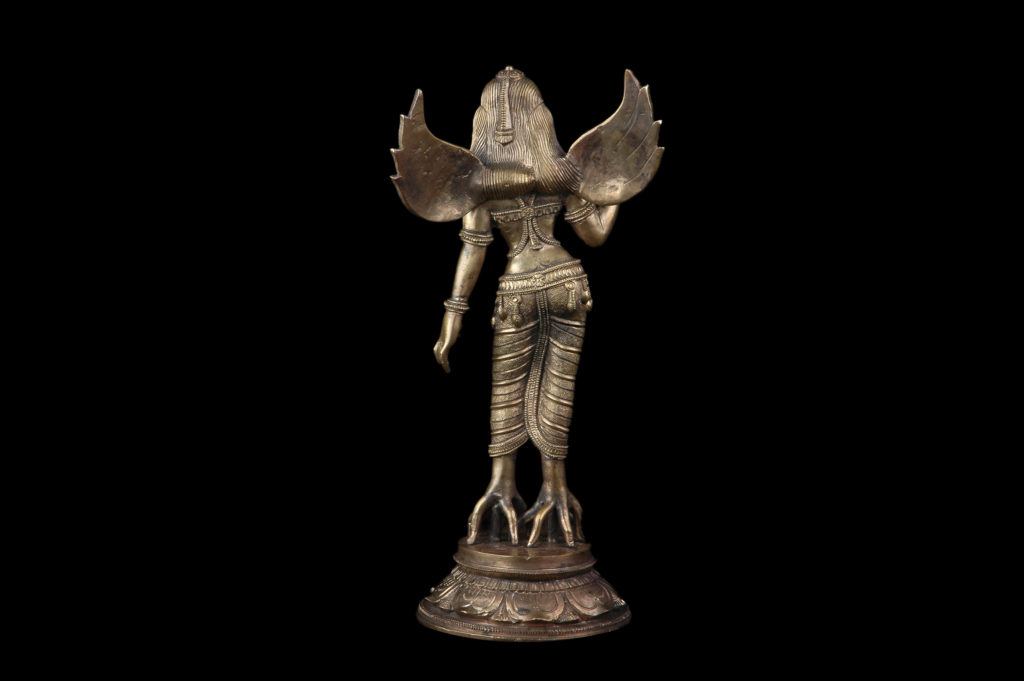 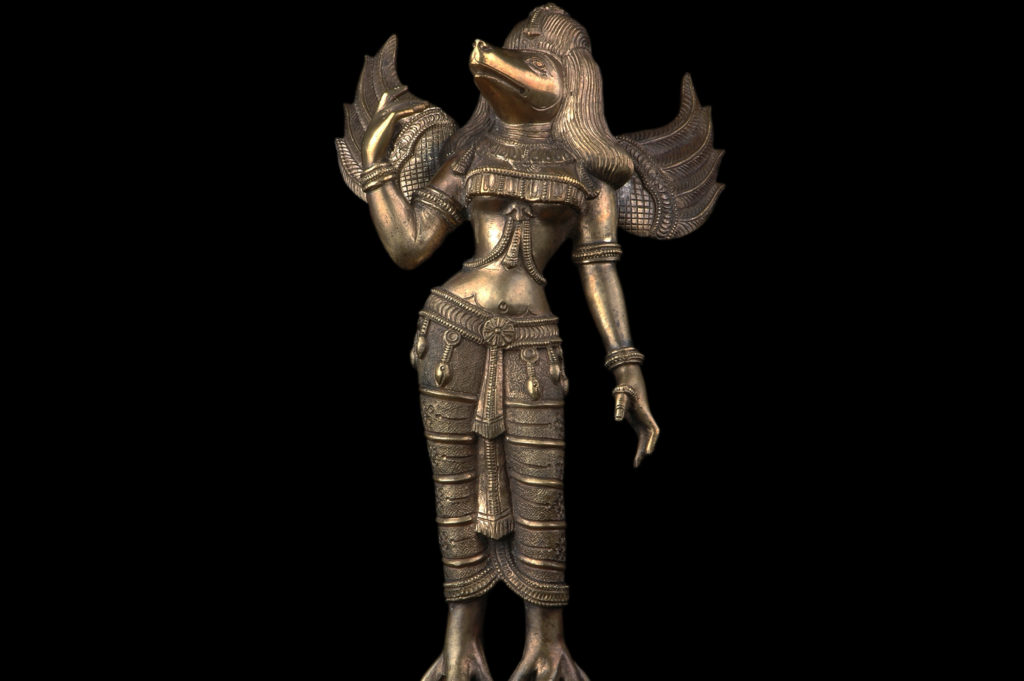 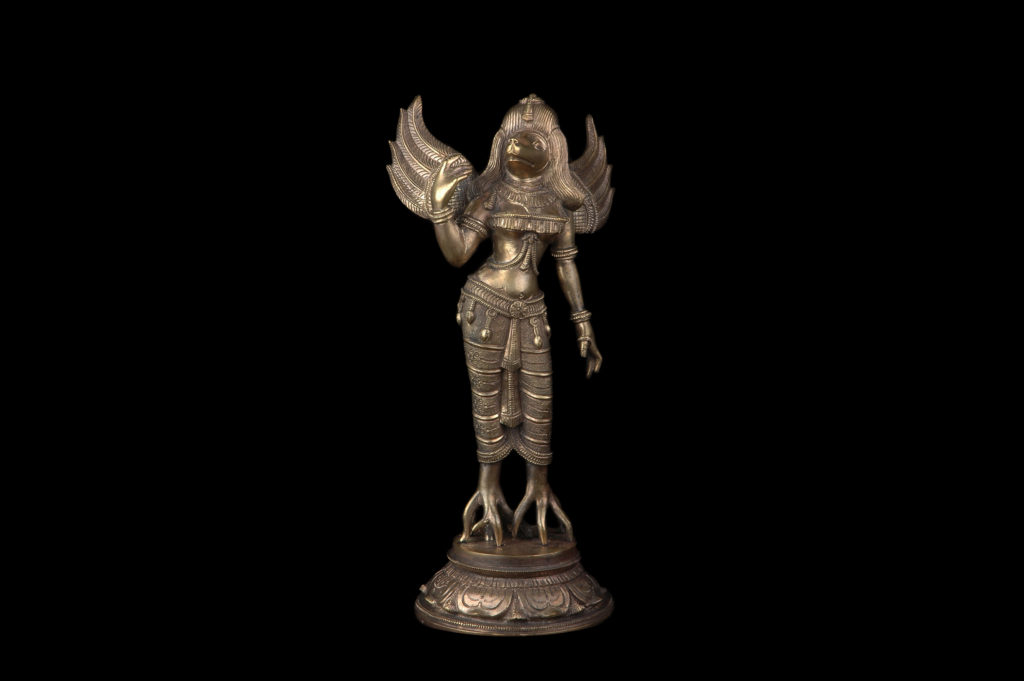 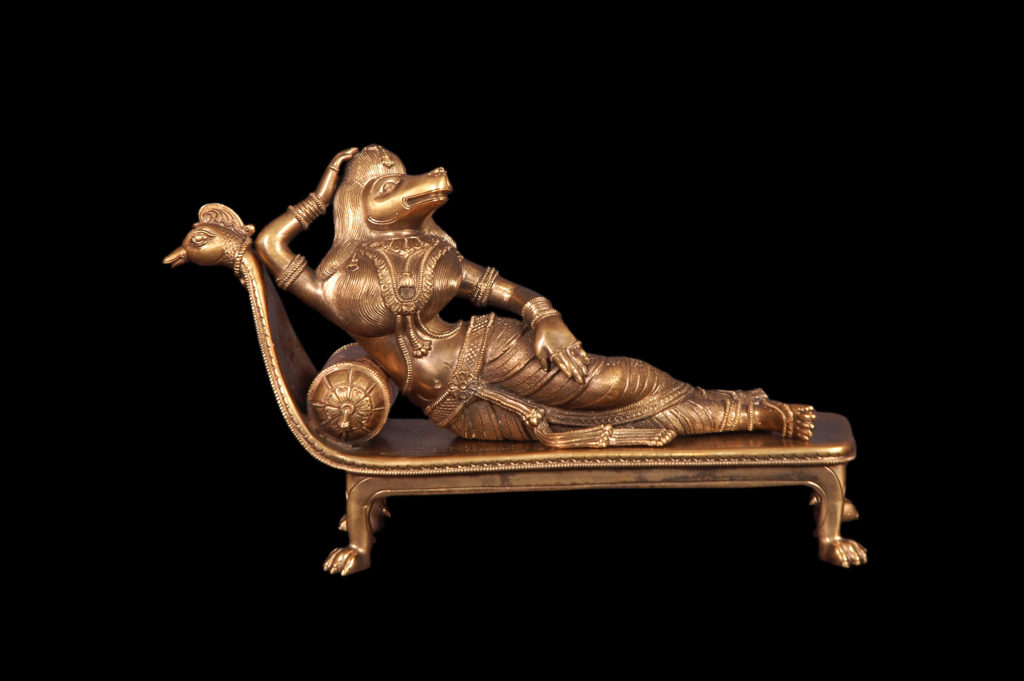 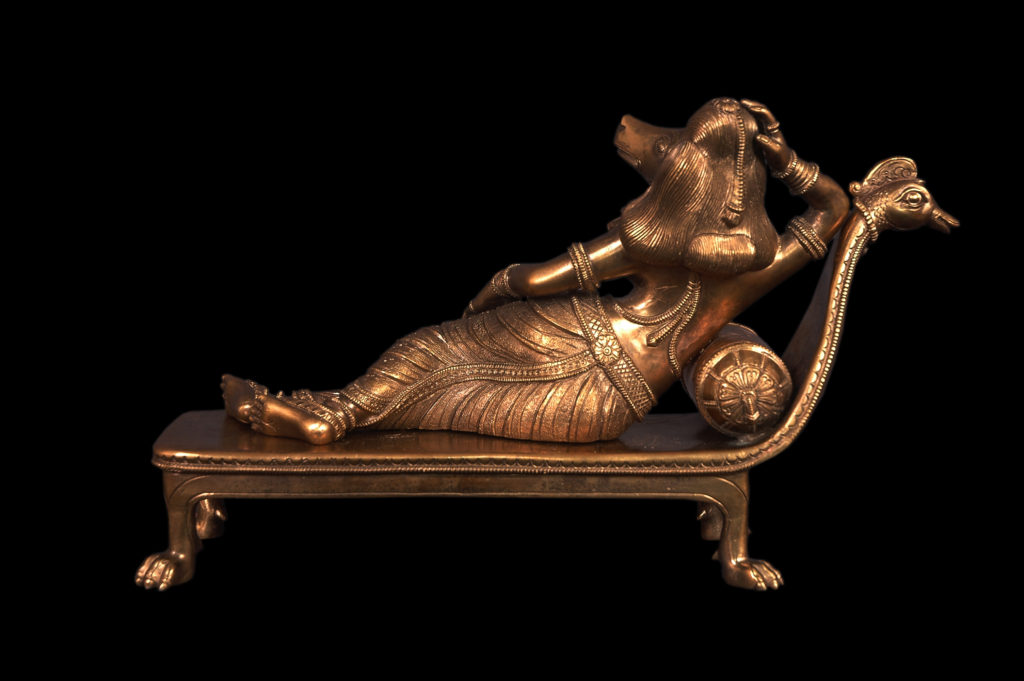 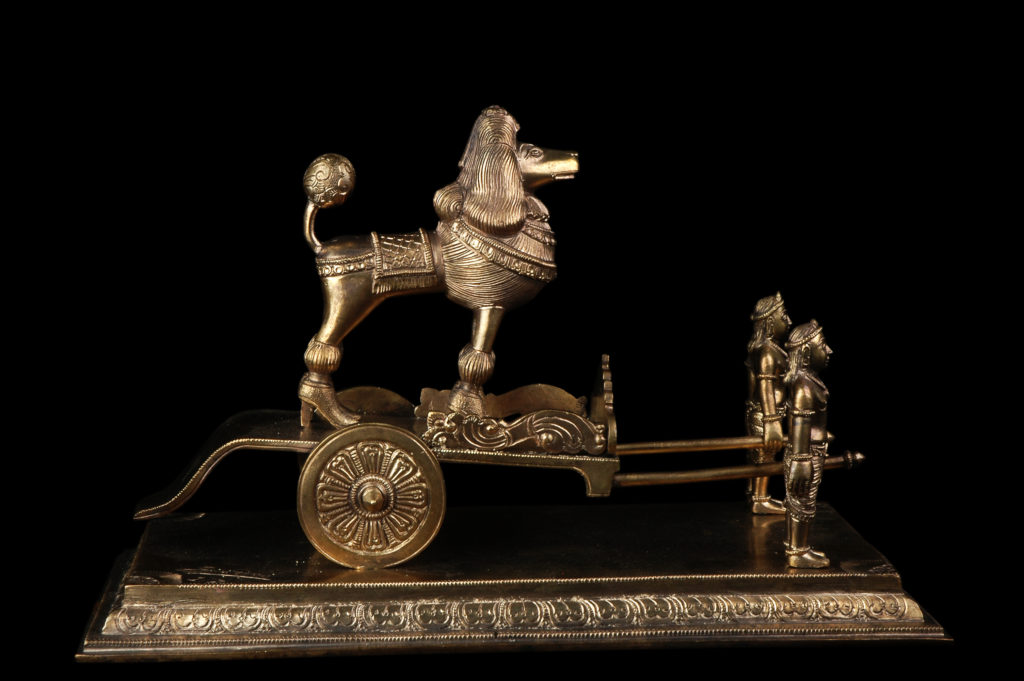 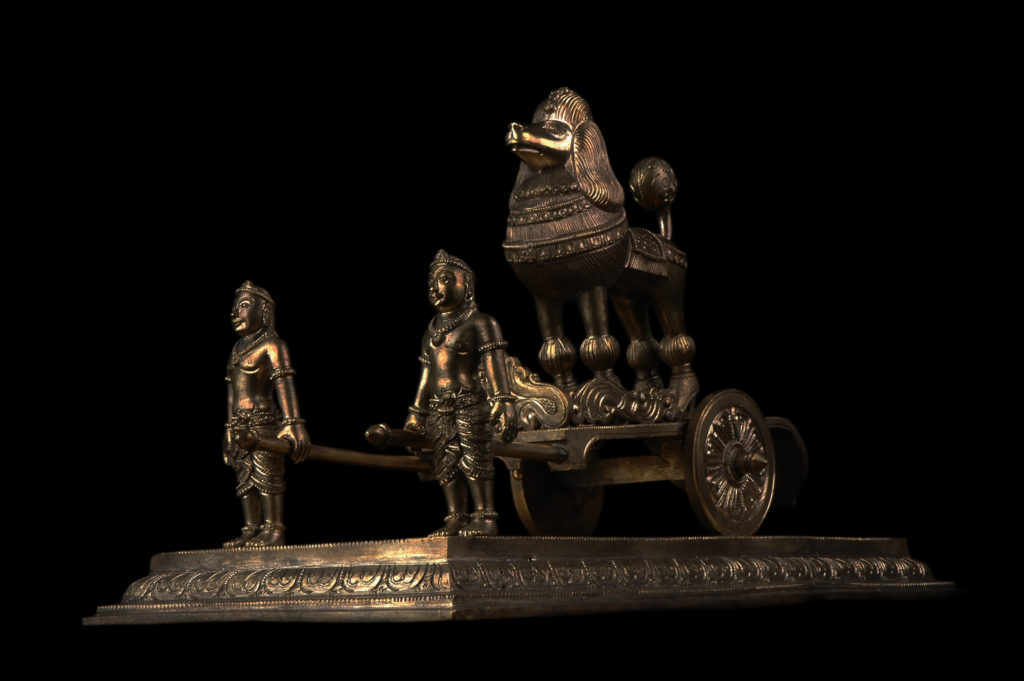 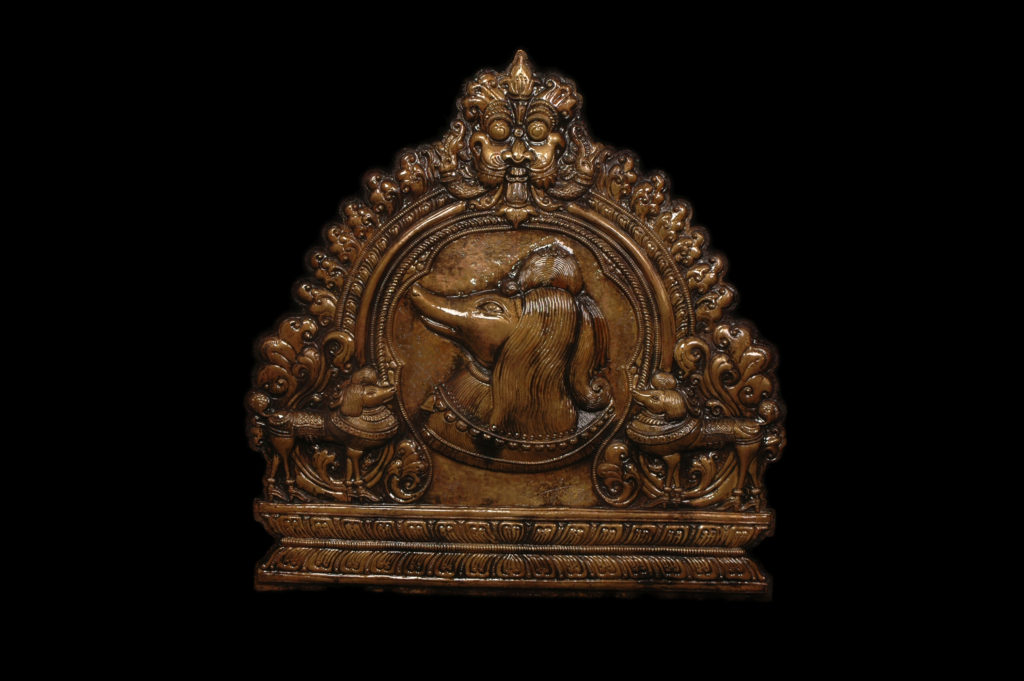